Henley Construction held its 23rd Annual Golf outing on Wednesday, October 16th. It proved to be a wild and wet event this year, but eighty golfers came and persevered through the nine holes until we were shut down by the weather. All of us at Henley Construction would like to gratefully thank those who contributed to our annual fundraising efforts to raise money for the Muscular Dystrophy Association. Working together, this year we were able to raise $62,170 for a combined total of $164,000 since 2016 when we began our campaign. Thank you too, to Dogfish Head Alehouse – Gaithersburg, MD for their very generous contribution of providing a wonderful lunch for all the players and a keg of their “Punkin Ale” to be used as a prize at one of our contest holes. They represent the best in community and neighbors. Have begun plans for 2020’s outing, stay tuned!

What you can read next 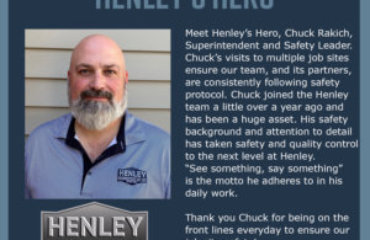 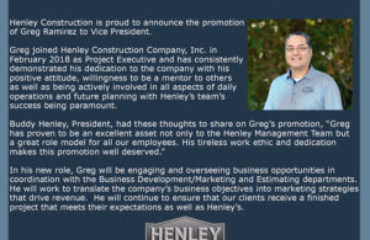 The team at Henley is elated to be able to celebrate Jose A. Osorio on his 20th anniversary with Henley Construction and thank him for his strong work ethic and dedication through the years. While there are still many projects to build, Henley is prepared and ready with individuals like Jose, working out in the field with our crews, demonstrating Henley’s Core Values and being an integral part with our project’s progress and success. We value you Jose for all you contribute daily to making this work-family stronger and better. Thank you! ... See MoreSee Less

Henley’s Core Values include RELATIONSHIPS, GROWTH, SOLUTIONS and PERSPECTIVE and managers look to recognize those individual team members who demonstrate them in their daily work.Both Eric and Arnold have done just that at our Sully Community Center project. Their dependability, strong work ethic, positive attitude, and willingness to extend themselves not only through extra time and effort but learning new tasks, have contributed with helping the project team advance to getting the job ready to punch.Painting, Finish Carpentry, Floor work, masonry repairs, hardware installation and troubleshooting, caulking, equipment assembly and cleaning, all done in earnest to help their team members. Their willingness to learn new things, to better not only themselves but the Henley team, all while paying attention to quality control and safety. All of us at Henley thank you, Eric and Arnold, for stepping up and making us better. ... See MoreSee Less

Congratulations to Nate on celebrating five years with Henley Construction this month. Nate started as a Field Engineer after leaving a career in the health industry to pursue his interest in construction. In the past five years, Nate has quickly moved through the ranks and is now a Project Manager overseeing multiple renovation projects for K-12 and Higher Education facilities. Cheers to five years, Nate! ... See MoreSee Less

Henley is proud to share that our team member and intern, Evan Rakich has been recognized at Washington County Technical High School’s Celebration of Excellence, having earned a GPA of 3.7 or higher from his freshman year through now, in his senior year. The achievement reflects a tremendous amount of dedication, determination, and perseverance. Beyond school, Evan also made it to the Maryland State Regionals in wrestling all while working with us at Henley two to three days a week with his internship and doing a great job with the Henley team.The team at Henley is very happy to celebrate all of Evan’s successes and not surprised with the phenomenal attitude and strong work ethic he brings every day. Congratulations Evan! ... See MoreSee Less

Associated Builders and Contractors (ABC) 33rd annual National Craft Championships is today in San Antonio, Texas and Chuck Rakich is participating as a Safety Judge sharing his expertise with regards to Safety in the construction industry. So happy he is a member of Henley Construction’s team and has this opportunity to share what he knows with so many others.The Craft Championship includes more than 175 craft students from across the country who come together to demonstrate their superior skills, education and safe work practices competing for top honors in their chosen craft. Fifteen competitions, representing twelve crafts, including a team competition with four journey-level craft professionals per team work together to complete a joint project is what’s in store for them today. ABC offers more than 800 education programs across 69 chapters to help train the next generation of construction workers. Construction offers a promising career path from apprenticeship, through journey-level worker to business owner. Wishing success to all the participants in today’s competition! ... See MoreSee Less

Congratulations to Nate on celebrating five years with Henley Construction this month. In the past five years, Nate has quickly moved through the ranks and is now a Project Manager overseeing multiple K-12 and Higher Education renovation projects. Cheers to five years, Nate!

Wishing everyone a Merry Christmas and a happy, healthy New Year!
https://conta.cc/3qif26e

We wanted to take this opportunity to express our gratitude to all those with whom we have worked together with over the years. Your partnership is much appreciated. Wishing you and your family a happy, healthy Thanksgiving.